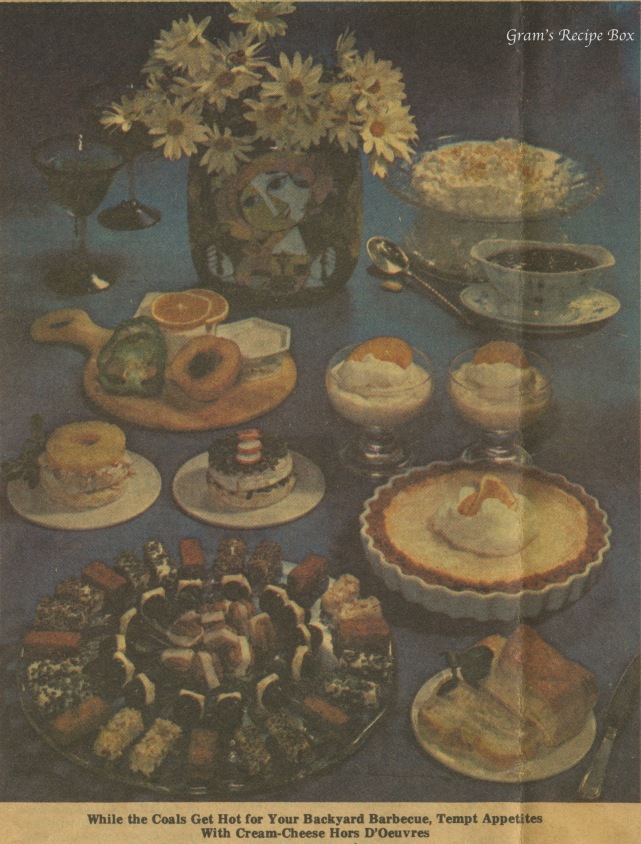 We are back in business, folks! I thank you for your patience for the past year. Let me just say that when you endeavor to renovate your home, it will likely take much longer than you expect, and if you live in your home during the project, add another month or two. O.o

Anyway, what a way to get back in business than with some cheese-y recipes. From 1980 (yes, that’s 37 years ago, gulp), these newspaper clippings were saved by someone who wanted to change things up for her next party. The article talks a lot about barbecues and summer time, but these could easily be repurposed to the upcoming winter holidays if you like. As the blurb below says, just stock up on cream cheese, it will make everything better! For your enjoyment, there is a recipe for Cream-cheese Hors D’oeuvres, Danish Cream and Camembert, Cherries N Cheese Dessert, Danish Chiffon, and Fruited Danish Cheese Pie; next clipping has Maraschino Cherry Cheesecake, Maraschino Cherry Pudding Parfaits, Baked Cherry Custard, and Cherry Vanilla Pudding. Down below on the last clip, there are a plethora of pickle recipes. Not to make pickles, but ways to use them. 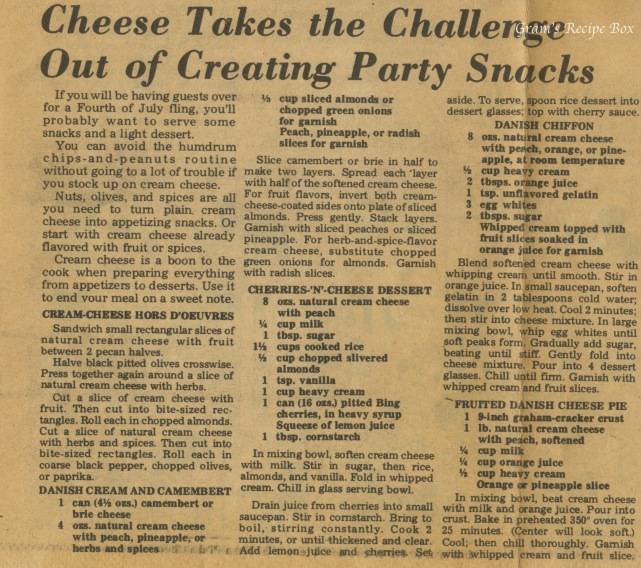 Let’s try to find the corresponding items in the picture, above. The cream Cheese Hors D’oeuvres appear to be the plate of bite sized items in the lower left corner of that picture. They look like they are trying to disguise themselves as sushi or mini sandwiches. I’m not sure what the things in the middle are, they look a bit like candy but I think you’d have a savory surprise in your mouth if you bit into one expecting sweet. I think they are a black olive, halved and then wrapped around a bit of cream cheese.

Above that in the photo, looking like a pair of open faced egg mcmuffins, are the Danish Cream and Camembert. They appear to be some kind of cheese spread, but there aren’t any crackers evident or mentioned in the recipe. I imagine this would be best with Wheat Thins.

Jumping over to the right of the flowers in the Picasso vase we have the Cherries N Cheese Dessert. This is meant to be spooned into glasses, then topped with the cherry sauce. I can honestly say I’ve never thought of combining cream cheese and rice before now. And, I will attempt to never think of it again.

Finally, at the mid-right, something we all recognize, which is a cheese cake. That is the Fruited Danish Cheese Pie. I’m not up to speed on my Danish recipes, but does anyone know if cream cheese is a thing in Denmark?

There are two mystery items I’m not certain about: something with a peach and green pepper slices, and something that looks like a sandwich but I’m guessing is not. I have no clue and they aren’t referenced in the rest of the recipes.

This clip has four cheese cake or pudding/custard recipes, all with cherry, which is fine with me. Many places use strawberry or raspberry for toppings and I don’t care for those all that much, so cherry is A #1 in my book. Maybe not in these great of quantities, but you get the picture. 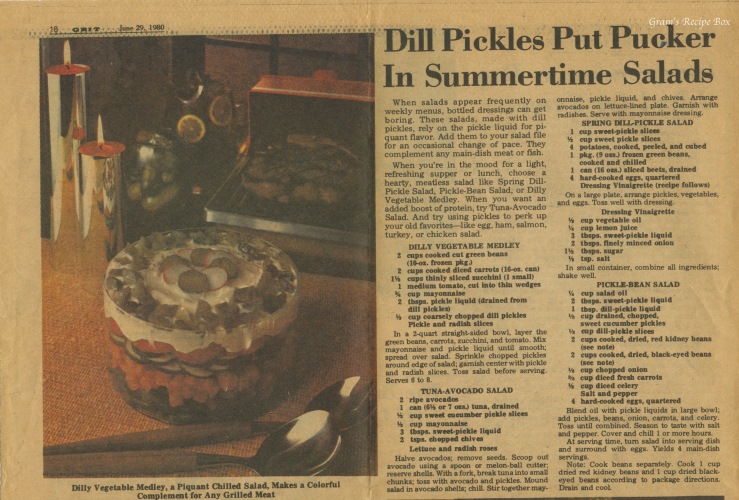 Finally, dill pickles and a variety of ways to insult your gastrointestinal tract. The worst offender is the Dilly Vegetable Medley, which is to be arranged in a straight sided bowl, like a torte. Layer all the various vegetables and heavily garnish with mayonnaise flavored with pickle juice. Listen, I like pickles, but this is just ghastly. The only thing that could make it worse is my first assumption that it would hold its shape because it was in gelatin.

Next recipe is Tuna Avocado Salad, e.g. tuna salad in an avocado shell, leading me to believe this newspaper is from California; Spring Dill Pickle Salad; and Pickle Bean Salad. This needs no explanation…it is pickles and beans, garnished with boiled egg quarters. If you like dill, dill pickles, or pickles in general, these might have sounded like fabulous dishes at the time. Who knows? We all probably ate them at Aunt Freda’s house and didn’t even think twice.