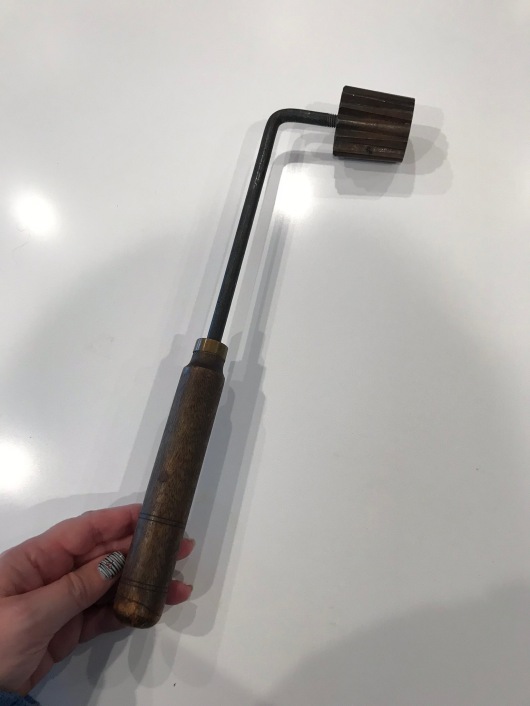 What could this beat up old thing be?

I have had this thing forever! I was unpacking a box of miscellany today and found it along with another gem I will save for a future post. My mother had this, it had been her mother’s. I don’t remember Mom ever using it. It is a Swedish Timbale Iron… We aren’t Swedish lol and I have no clue why Gram would have had it, except maybe it was a popular thing at the time she acquired it. It’s heavy and would make a good weapon haha, I believe that end piece is solid iron. I’d guess many of these were surrendered to the war effort in the 40s.

What exactly is a timbale, you ask? You have probably come across them in some form or fashion. In a general sense, a timbale is a crust, originated from the French for drum, and can also refer to food cooked inside a crust or case.

People of Scandinavian descent may recognize timbales, as they are the counterpart to rosettes, the popular Norwegian, Danish and Swedish Christmas treat. To call them a cookie doesn’t sound right, but they aren’t a donut either. Both rosettes and timbales are made by dipping the iron into batter and frying in hot oil or grease. The resulting case or pastry are then dusted with sugar, filled with puddings or fruit, and enjoyed with coffee, tea or chocolate.

I haven’t tried making these yet, having just unpacked this today, but I would love to try them one day. I remember having rosettes at my friend Diane B’s house in high school. So good, and I’m sure her mom would know what this iron is missing – its other pieces! When it was given to my mom, it must have had this shape on it and the rosette or other shapes somewhere else. You can see the iron handle is threaded so the head could be changed. Original sets were sold with a variety of shapes and sizes. Mine looks just like the ones below in a photograph out of the famous Fannie Farmer cookbook. I do wonder now about its age! (I also feel like this was a missed opportunity on the Great British Baking Show lol.)

From the 1896 Fannie Farmer cookbook, look at all the pieces!

The recipe for both treats appears to be the same, but you can fill your timbales with things other than sweets. Much like kolacky, the influence of new surroundings and cultures changes the way foods are consumed. While kolacky is traditionally a sweet bread, in Texas there is a popular savory kolacky movement that sounds delicious. Swedish timbales can be filled with salmon, asparagus, minced meats, and so many savory choices. My mouth is watering! Just a search on cooks.com brings up numerous pages of recipes for timbales of all kinds.

Did you know what this was when you first saw the picture? Some newer rosette sets have two prongs so you could make multiple items, whereas the traditional Scandinavians spent up to 3 minutes per item. Sounds tedious! Made the long winter days pass, I suppose. Have you made timbales in the past? I’m curious about your experience and memories.

Here’s a recipe I found specifically for timbales, from SwedishFreak.com.

1. Sift sugar, salt and flour, mixing together well.
2. Stir milk and eggs together.
3. Gradually combine flour mixture and egg mixture.
4. Heat timbale iron in shortening or fat for 2 minutes at 375°F (190°C), then let the extra fat drain off.
5. Dip timbale iron into batter so that it’s submerged approximately 1/2 inch from the top.
6. Put the timbale iron back into the shortening or fat.
7. Let the case fry until it is golden brown and slides off the iron.
8. Reheat iron for a few minutes, then repeat.

Step by step pictorial instructions to make rosettes via TheSpruce.com

Timbale recipe in the Fannie Farmer cookbook via K-State Libraries

Video on how to make both via NordicWear on YouTube