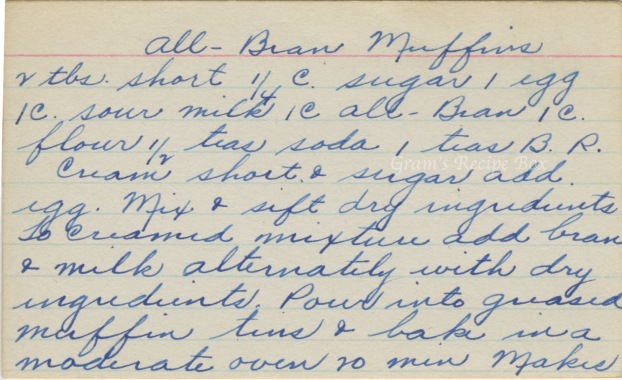 All-Bran by Kellogg’s, while suggesting it is “all” bran, is actually a cereal made with bran, sugar, malt flavoring and salt. Some vitamins and minerals are added for health benefits. All-Bran was introduced in the USA in 1916. According to the Kellogg’s website, they “invented” bran muffins, but I found a citation at a different recipe that mentioned a bran muffin recipe dating back to 1857. That earlier recipe calls for “bran (unbolted wheat flour).” According to Bob’s Red Mill, unbolted wheat flour contains all the germ, oil and fiber from the wheat kernel, and is commonly called Graham flour. You may not remember this post from a while back where we discussed Graham flour and its interesting origins (itinerant minister, healthy living, saving souls through vegetables & morality). Considering that muffins existed, and Graham flour existed, it is unlikely that Kellogg’s “invented” the bran muffin. They may have popularized it, but the Fannie Farmer cookbook had a recipe for bran muffins in 1907, a gap of 9 years before All-Bran was released. I tend to associate bran muffins with the health food craze of the late 70s and 80s, myself.

The Original All Bran Muffin Recipe via Kellogg’s

One thought on “All-Bran Muffins”