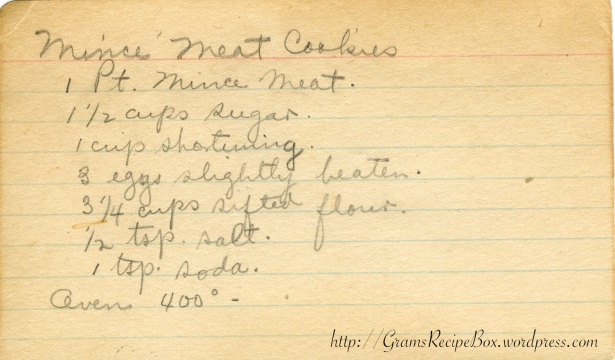 Mince meat pie is one of my favorites, although it’s not all that popular anymore, having been replaced at the holidays with pumpkin, sweet potato and pecan pies. I made a mince meat pie a few years ago and I think my dad and I were the only ones who had any. Although the name is deceptive, mince meat doesn’t always contain actual meat. Some recipes do call for beef suet (fat), and some even call for venison, but modern recipes contain fruit and nuts (raisins, currants, prunes, walnuts, pecans, etc). The making of mince meat in modern recipes calls for brandy or whiskey.

Mince meat was originally an entree in the middle ages, but with the sweetening from the fermentation of alcohol and the sugars within, it became more of a dessert. It was popular but saw a resurgence in the 19th century as the Victorians made it a yuletide dish. One medieval recipe included a Royal pastry recipe made from butter, egg yolks and flour, so it clearly was intended to be served in some sort of pie or pasty.

You can consider it much like a preservation technique – most 19th century recipes for mince meat have it set for two weeks prior to use. By that point, all the contents are completely pickled in the alcohol. Often, people confuse mince meat with minced meat – which is in fact, meat cut very finely.