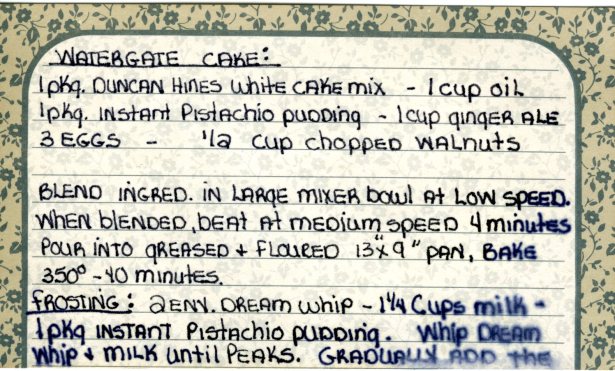 This recipe had me turning to Google to find out the history behind the Watergate Cake with Cover Up Icing. The way the story goes, it was one of two items that were introduce by the makers of Jell-O and were popular at the time the Watergate Scandal took place. Jell-O had introduced pistachio jello and pudding, and a jello salad and pistachio cake were the brainchildren of the Jell-O test kitchens, apparently. Pistachio cake and pistachio salad quickly were renamed Watergate Cake etc., because they were filled with nuts and covered in fluff, ostensibly like the Nixon administration had been. While this particular recipe calls for the cake to be made in a 13×9 pan, images found online are of a bundt cake smothered in fluffy icing. Ick.