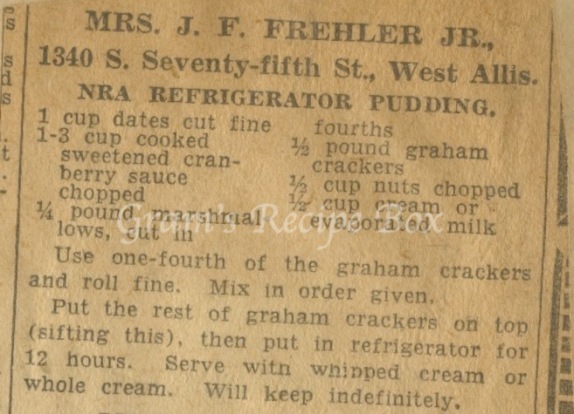 From Mrs J. F. Frehler Jr in West Allison, we have NRA Refrigerator Pudding. I don’t think “NRA” in this context means National Rifle Association. It is more likely to mean National Recovery Agency aka the New Deal, passed under President Franklin Roosevelt in 1933. It was designed to help normalize prices and wages during the Great Depression so the nation could recover and move into prosperity again. Although it was only in effect for two years, the concepts of fair labor practices, fair competition and minimum wage + maximum work hours was popular with the nation and helped guide the political landscape for many years after it ended.

Being as many of these recipes seem to date from around the 1930s and later, this makes some sense to me. The concept of frugality was crucial to surviving and recovering from the Depression. If all these ingredients were fairly easy to obtain, this could be a simple dessert to make for a hungry family.

Use one-fourth of the graham crackers and roll fine. Mix in order given.

Put the rest of the graham crackers on top (sifting this) then put in refrigerator for 12 hours. Serve with whipped cream or whole cream. Will keep indefinitely.

What I think she means: of the 1/2 pound graham crackers, set aside 1/4 of this to be crushed fine. Mix this with all the other ingredients. Put the rest of the graham crackers on top of this mixture (crumbled? whole? it’s a mystery), then refrigerate for 12 hours.