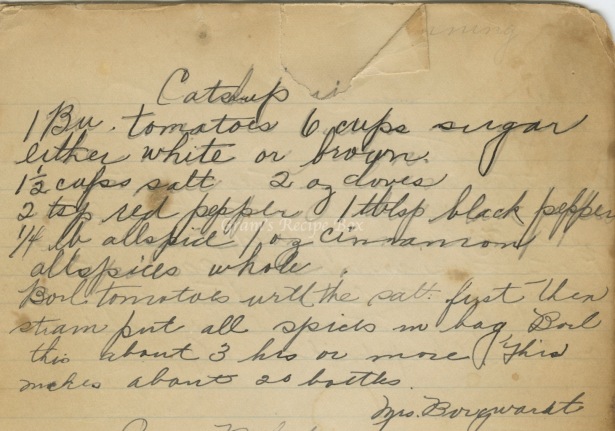 I have made my own barbecue sauce, but never my own catsup. I’m afraid I rely heavily on Heinz 57 lol. This recipe was originally written in pencil and then overwritten in pen. It was obviously one she didn’t want to lose. I’m uncertain if some of these ingredients would have been whole or ground – cloves, pepper and allspice can all be whole or ground. I’m going to take a guess that the cloves, pepper and cinnamon would be ground. The allspice is a bit of a mystery because it lists the quantity and then says “allspices whole.” Note, a smart reader suggested the wording is “all spices whole” meaning to keep the cloves, pepper and allspice whole and not ground.

6 cups sugar – either white or brown

Boil tomatoes with the salt first, then strain. Put all spices in bag. Boil this about 3 hours or more. This makes about 20 bottles.