A while back, I posted the recipe for Blackberry Wine Cake, and at the time I thought it sounded interesting. Well, the other day I was in a baking mood, so determined to try this out. First, I went looking for a couple ingredients: blackberry wine and blackberry jello. The wine was the easy one. I found a small bottle at BevMo that was just slightly over the amount called for in the recipe. Perfect. Next, blackberry jello. I searched a couple grocery stores in my area, but it wasn’t in either one. Rats. After considering my schedule for the day and weighing the possibly fruitless searches at farther grocery stores, I decided to use a substitute flavor. While blackberry jello is still available, it must not be as popular in my area. Check with your local stores or order online. 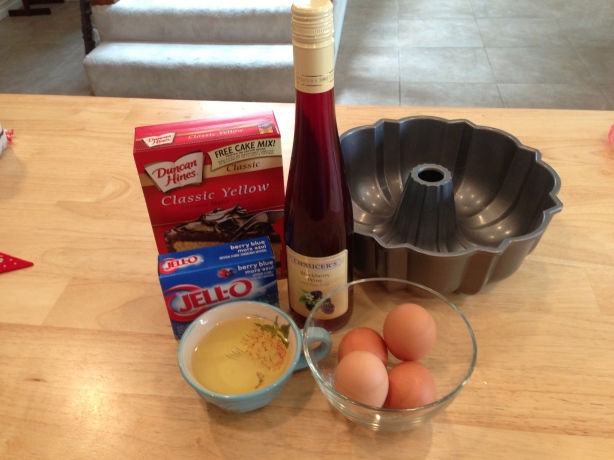 This is a very easy recipe because you are using a boxed cake. After mixing it, my batter was a weird gray color. I wonder if using the proper jello would have made it more purple. Anyway, I baked it the correct amount of time and let it cool in the pan upside down. After several hours, dinner was getting close and so I removed the pan. It must have needed to cool a bit longer because it cracked, boo.

We made the glaze next, which was simple as well. The cake has a strange texture on the outside, almost like a crust. The glaze tended to run right off and puddle on the plate. 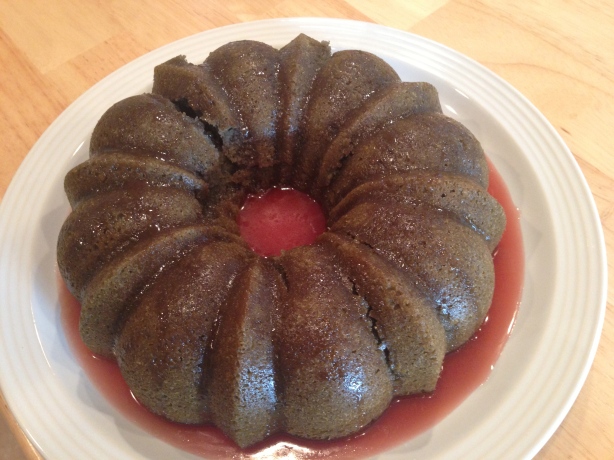 I guess I expected it to be more like a drizzled icing. I suppose I could have cooled the glaze a bit more before pouring it on.

All in all it was an interesting flavor. Very fruity, not as sweet as I expected. The cake was very moist, which was pleasant. I gave it just a dollop of the whipped cream but it really wasn’t necessary. All in all, I don’t think I would make it again, but I don’t regret making it. It would be a different summer cake for a garden party or other get together.