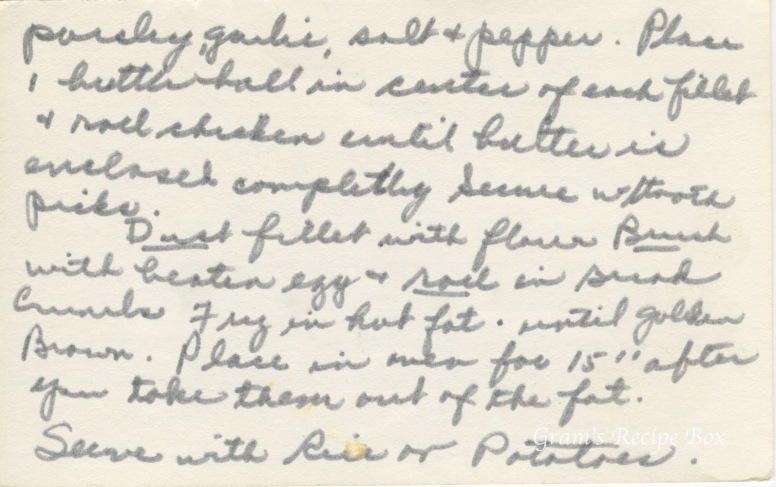 A fine article on the NPR website educated me on the origins of Chicken Kiev…not from Kiev, not made with garlic. Apparently this rather time consuming chicken cutlet originated in the culinary schools of Paris during the 19th century and was made with veal rather than chicken. When the Russian based students took the dish home, they prepared it with chicken breast, which was considered to be a delicacy at the time. I am not questioning this, just go with it. :-) As the entree was to be served to royalty, dignitaries and the upper echelon of Russian society, it would not have been prepared with garlic as that would have made close conversations unpleasant. Over time, Russian immigrants coming to American added ingredients, changed the flavors, and The Russian Tea House in New York, among others, added this to their menu in an attempt to draw in immigrants yearning for a taste of home. The funny thing about that is that in Kiev, Ukraine, they didn’t serve Chicken Kiev until the 1960s when tourists started asking for it…due to having had it in America…thinking it was a taste of home….never knowing it was really French…

Dust fillet with flour. Brush with beaten egg & roll in bread crumbs. Fry in hot fat until golden brown. Place in oven for 15 minutes after you take them out of the fat.

Serve with rice or potatoes.