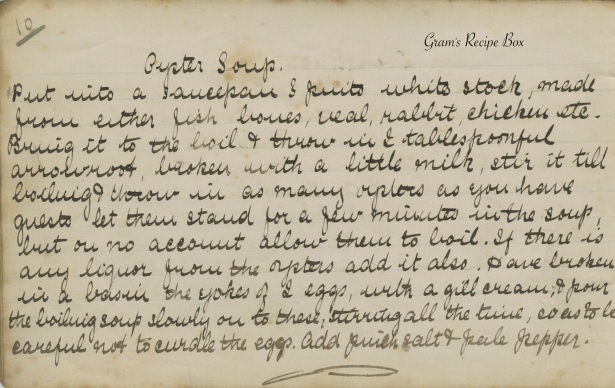 This recipe for oyster soup had me turning to the internet to research. Because this is at least 110 years old, some cooking terminology and ingredients have changed over the years. Right off the bat I must make it clear that the oysters are to be shelled prior to cooking. It might sound like common sense to many of us, but I would hate for there to be a “Bridget Jones” moment in someone’s future.

Secondly, arrowroot. This is a root commonly available in its powdered form. It is a tuber grown in the equatorial climates, and apparently was so used in British cuisine that Napoleon claimed it was Britain’s way of supporting its colonies. The powder you find in the store may or may not be pure arrowroot, so have care when making your selection. When combined with other starches such as potato starch the desired results may not be achieved. Arrowroot is used like corn starch or flour in sauces, as a thickening agent. In soups, it would add some thickness to broth without breaking down or becoming gritty or clumpy.

Next, “gill cream.” I was stumped at first because I was looking for the source of gill cream. However this refers to a measurement. A gill is 1/8 of a British pint, so use heavy cream or half & half, and of course, a British pint is larger than an American pint, so a gill in America is .6 cups, so slightly over 1/2 a cup.

Put into a saucepan 3 pints white stock, made from either fish bones, veal, rabbit, chicken, etc. Bring it to the boil & throw in 2 tablespoonful arrowroot broken with a little milk, stir it til boiling & throw in as many oysters as you have guests, and let them stand for a few minutes in the soup, but on no account allow them to boil. If there is any liquor from the oysters add it also. Have broken in a basin the yokes of 2 eggs, with a gill cream & pour the boiling soup slowly on to these, stirring all the time, so as to be careful not to curdle the eggs. Add pinch salt & pinch pepper.