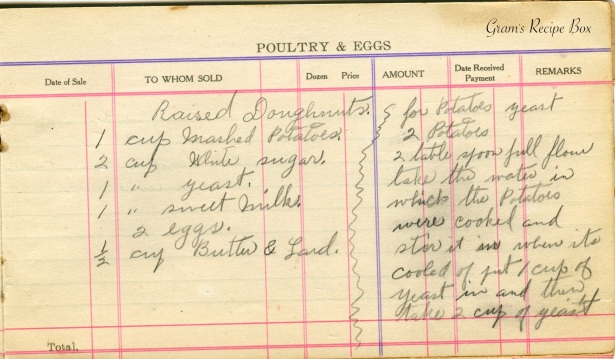 Dough nuts don’t seem like they would be especially difficult to make at home, just make up the dough and fry them in hot grease. Like making french fries. Oh, my mother used to make us french fries cooked in hot bacon grease, to die for!! Anyway, raised doughnuts (dough nuts, donuts) call for yeast in the dough and need to rise for about an hour, then rise again after they have been cut into dough nut shapes.

If the reference to “potato yeast” confuses you, don’t worry you are not alone. In my research I learned that while potato dough nuts have been around for years, in the 30s or 40s, a pair of enterprising brothers in Utah coined the word “spudnut” to reference potato flour. The potato flour would have been used the same as mashed potatoes in this recipe. Apparently there was a spudnut craze for quite a while, and there remain Spudnut Shops nationwide. As to the directions up there, I think it creates a type of starter, like for sourdough. Anyone have input here?