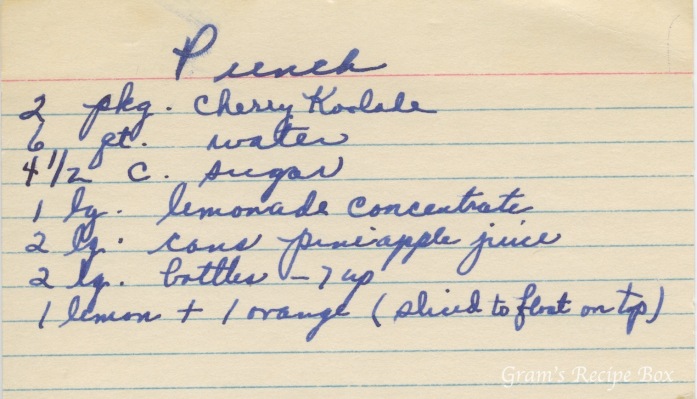 Here’s a traditional punch drink using koolade, water, lemonade, and 7-up among other things. We probably all had this at some point in our lives, whether at a school or scout activity, church or birthday party. There is a long tradition of punch drinks of all variations, and “spiking the punch bowl” is a teenage rite of passage in some areas. But did you ever wonder why it’s called “punch”? It’s got an interesting history, so read on.

Punch the word comes from the Sanskrit word pañca, or from the Hindustani paanstch both meaning “five,” for five ingredients. Once explorers reassured the Old World that ships would not fall off the edge of the world if they sailed away, ships began exploring all over. Indians (the ones from India) drank punch made of alcohol, sugar, lemon, water and tea, and shared this with the British. The East India Company, which controlled the spice trade routes, helped to bring the drink back to England and ultimately Europe, where it received local and regional variation. This was in the 17th century, think pirates of the Caribbean, highwaymen, men and women wearing white wigs, etc. Punch used in large gatherings was often a watered down, less alcoholic type to discourage public drunkenness. Around mid 17th century rum began to be a popular ingredient. It was the drink of choice for parties for several hundred years and punch bowls became a household necessity for those who would host large gatherings. Queen Victoria in the 19th century did not like alcoholic drinks for women and children, and so the nonalcoholic versions became more popular. Nonalcoholic punch reigned at social events until such time as women could drink publicly without bringing scandal, i.e. the late 1950s. While punch bowls collected dust in the closet or were brought out for use at children’s parties and church socials, mixed drinks, wine, and plain mixers became the norm for social gatherings.

Punch is popular worldwide, with many variations for different cultures. The British Wassail bowl is a punch drink, as are mojito, agua loco, and ponche. From local liquors and fruits used, each region adapted the drink to their tastes. We see that in all recipes and I’m sure we all do that ourselves. We leave out something we don’t like or add in something we think will make it better. Who knew that a recipe for a simple punch drink would have such a fascinating history behind it!? Links to a few sources are below the recipe for your further reading enjoyment.

The Surprising History of Punch from History

A History of Punch (part 1) from DrinkingCup.net