One way I find source material for this blog is to troll ebay and pray that some recipe collector doesn’t snipe the items I want. Recently I have bid on several handwritten recipe journals dating from the early 20th century and earlier. Most I either gave up on because the price was just too rich for me, but some were stolen right out from under me in the last seconds of bidding. Such are the risks of the auction format. But, one did not escape me and I am beyond excited about it! 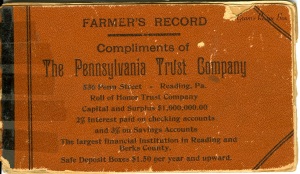 In an old Farmer’s Record (compliments of the Pennsylvania Trust Company, thank you very much), after the exciting treatise on easy farm book keeping…

And after the wage records of one Lillian M. Starns (or something like that)….

Were kept the recipes of daily foodstuffs and treats dating from 1936 or so. Reading, PA is almost as far across the state from Erie, PA as you can get, almost to the New Jersey border. My Gram lived in Erie and based on this lady’s frugality of using a perfectly good book to collect her recipes, I like to think they would have gotten along just fine. Since I can’t clearly make out the last name of the author of our little recipe book, I won’t really be able to find out more, such as her age or what became of her. This could possibly have been her “first” recipe collection as she was starting out in her married life. I like to think so. 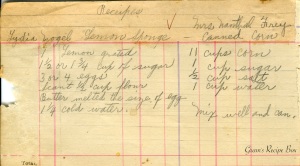 Nearly every recipe operates on the assumption that the homemaker knows what she is doing in the kitchen. Not much instruction is provided, so comment away with your ideas of what these will make and how they ought to be prepared!

Butter melted the size of egg

Mix well and can

2 thoughts on “An exciting find!”