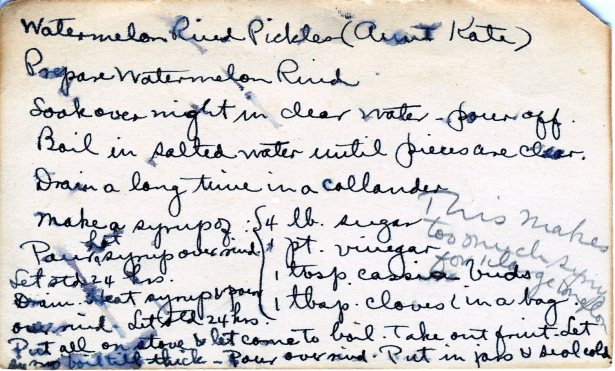 Today we have recipe number two for watermelon pickles.  This morning I asked my mom about yesterday’s recipe and she said that Auntie Fish was a close friend of Gram’s mother, Alice Sternberg. Fish was her last name, so Auntie Fish was a more familiar way of addressing her than Mrs. Fish, which seems rather formal for your mom’s best friend. My best friend is Auntie Tara to my daughter, so this makes perfect sense to me.

This recipe for watermelon pickles is from Aunt Kate. In a quick look at the family tree, there aren’t any people named Kate, though I realized that Gram’s Uncle John isn’t on it either, so clearly it could be a missing person. I’ll be seeing my folks again tomorrow, so hopefully will be able to clear up this mystery.

We all agreed after reading yesterday’s watermelon pickles that this isn’t exactly a morsel we are eager to try, although clearly it is supposed to be a sweet treat. I can’t really think of something comparable in contemporary foodstuffs.

This recipe calls for cassia buds, which I had to google. Cassia buds are the unopened flowers of the cassia tree, which is where we get cinnamon. They are harvested and dried in the sun just before blooming. According to the Spice House they are more floral than spicey and are used in pickling and mulling. As it turns out, one of my favorite cookies is made with cassia buds: pfeffernuesse! Learned something new today.  :-) Now, no more blather, here is the recipe.

Boil in salted water until pieces are clear.

Drain a lont time in a collandar

Make a syrup of:

1 tbsp cloves in a bag

Note from Gram: his makes too much syrup for 1 large melon