After reading the recipe for bread & butter pickles recently, and then doing some research on making pickles, I decided I would try to make this recipe from the Farmer’s Record. I was inspired by seeing smallish cucumbers at the store that would make the perfect B&B slices. In my research on pickles I learned that the smaller the cucumber, the better the pickle. It has to do with a chemical in the cukes that provides that “cucumbery” smell and taste. The smaller the cuke, the less strong that chemical. Also, they will have fewer seeds. Ideally you want to use pickling cucumbers which are naturally low in that chemical, but since I don’t have a farmer’s market handy, I went with these. 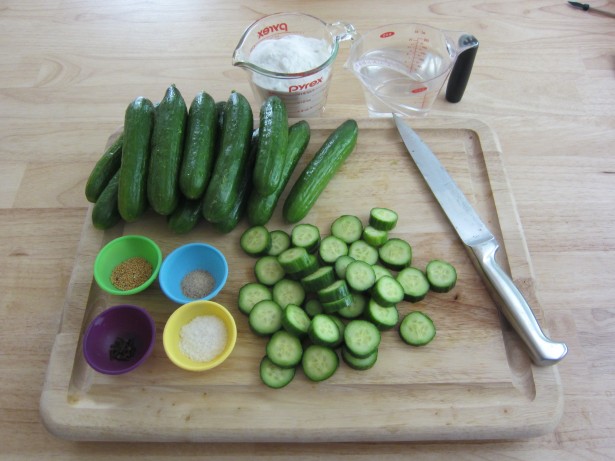 I have often admitted that I can’t leave anything alone, so I added a small amount of whole cloves to the ingredient list, even though it is not called for. It just sounded good to me. Secondly, I used sea salt, and since I only had celery salt on hand I reduced the amount of salt. You do not want to use iodized table salt for pickling as the taste of the iodine will taint the flavor. Pick up some sea salt or flake salt the next time you are at the grocery or a natural foods store. It’s worth it! 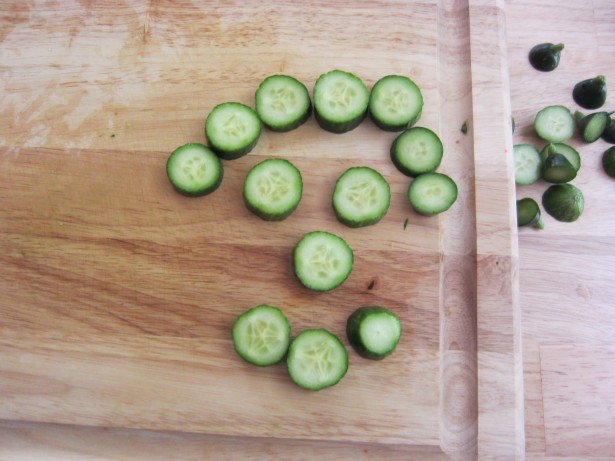 My helper was eager to work with the sliced cucumbers. She also stirred the vinegar and sugar in the large pot until the sugar was dissolved, and added the spices to the mix. Oh, she also added the cucumber slices. Basically Melody made these pickles. :-) 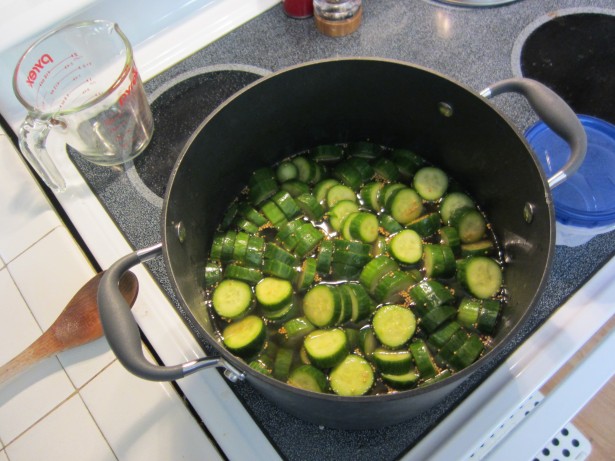 You can see here that the amount of vinegar called for in the recipe did not cover the slices, so I added about another cup of vinegar, another cup of sugar, and adjusted the spices a tiny bit. That is because I used 15 cucumbers instead of 12. We carefully brought them to a boil, stirring occasionally to make sure all the slices were submerged in the juice. In the meantime, I washed the jars in hot HOT water and set them aside still warm. We boiled the slices until they lost their bright green color and began to look like pickles. Wow, so simple! 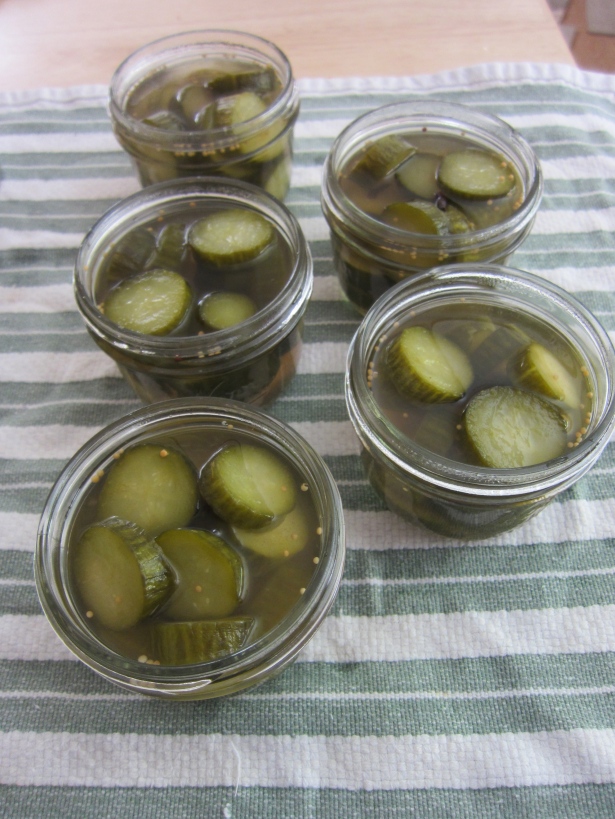 I used a slotted spoon to fill the jars with pickles then a ladle to fill in with juice. I had about 1 1/2 cups of juice left over. This picture shows five 1/2 pint jars, but I also had 1 1/5 quarts in another container that wasn’t as pretty. I call it artistic license. The best part? The pickles were AWESOME! I gave the jars to my friends at work and all of them loved the pickles – my one friend had to fight her daughter for the last slice. That makes my day! The whole process took between 45 minutes to 1 hour and that includes slicing all the cukes.

These are refrigerator pickles, meaning they must be stored in the fridge or they will spoil. If you want to can them properly to store in the pantry, you will need to boil the jars in hot water for up to 20 minutes depending on altitude. This will fully seal and sterilize the jars to prevent bacteria from entering and spoiling the food – and you.

Get creative if you try these! I have seen sweet pickles with onion slices and garlic, you could pickle carrots, green beans, baby zucchini, pretty much anything.

2 thoughts on “So Easy to Make: Bread & Butter Pickles”