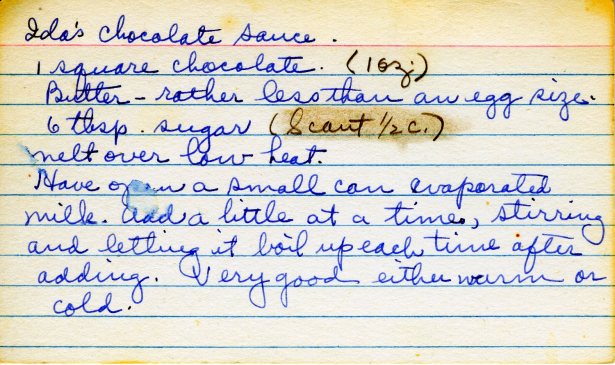 Here we have a second recipe for chocolate sauce. Where the first recipe was pretty much a “throw it together and use it” sauce, this one requires a little bit of time for cooking. It sounds delicious and I love Gram’s notes to herself. They are visual an easy to reconcile. I have no idea who Ida is. On that same note, I asked my mom this morning about Cousin Anne and she has no recollection off hand of who that could have been. She’s going to look at the card because there is some possibility it could be Gram’s mother’s handwriting, in which case Cousin Anne is easier to identify. If you’ve ever spent some time on Ancestry.com (like the Forgotten Old Photos site members who find all sorts of interesting information) then you know it can be confusing at times to sort through the tree and wrap your head around the relationships. Well, Gram’s family had quite a few twists and turns as it turns out – nothing scandalous – just confusing. Maybe one day we will figure out who Cousin Anne is. Until then, enjoy Ida’s chocolate sauce recipe.

Butter – rather less than an egg size

Have open a small can of evaporated milk. Add a little at a time, stirring and letting it boil up each time after adding. Very good either warm or cold.